Moonga: A gemstone with a lot of benefits 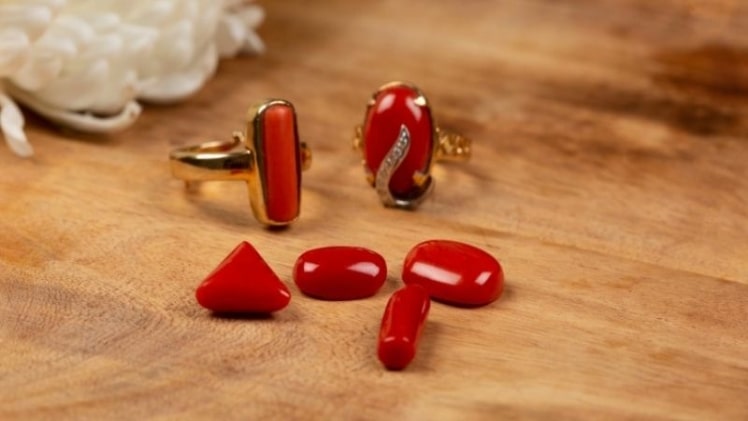 Moonga Ratan, a renowned member of the clan of the nine Navratna jewels, is a sign of ambition, life, and power. Natural Moonga is ruled by the planet Mars, also known as Lord Mangal in astrology, which signifies boldness, determination, and physical power. Red Coral Gemstone, commonly known as Moonga Stone, has many different names in different languages and civilizations.

This vibrant red-colored organic gem, unlike other Navratna jewels, is neither mined nor removed from the earth’s crust. Real Moonga is found in the deep sea and is made by live gelatinous marine animals known as Coral Polyps, or Corallium rubrum, which resemble colorful underwater plants. Scientifically, they are no longer stones; rather, they are leafless plants formed of rigid Calcium Carbonate. Though they may also be found in China and Japan, Italian Moonga is often regarded as having the highest quality of any of the sources. The red coral gemstone is claimed to have originated on an Italian sea reef. They may also be found in India, Italy, France, Algeria, Corsica, Tunisia, Spain, Sicily, and Sardinia, among other places.

Here are some of the benefits of moonga gem selections:

Red Coral is well-known for its success in positions requiring leadership. The user can hone his or her team management and administrative improvisation abilities with the assistance of a real red coral. This marine jewel is said to be excellent for persons working in the police, army, sports, politics, or other professions that need exceptional leadership characteristics as well as a great lot of physical and mental stamina.

One of the many well-known advantages of wearing a Red coral gemstone is its wonderful health benefits. Because of its magical healing qualities, a Real Moonga outperforms virtually all other gemstones in terms of providing health advantages.

It improves your immune system, strengthens your muscles and bones, and provides you with a stronger digestive and circulatory system for smooth blood flow. Cancer, breast cancer, brain tumors, bone marrow, and other blood-related disorders are all helped by the cosmic energies of a Natural Red Coral gem.

Moonga, like any other person, might be your ideal friend if you desire to acquire rapid yet honest cash. Mars is known in Vedic astrology as the ‘Bhoomi Karaka,’ or ruler of land, property, and riches. Wearing Munga stone is therefore believed to be extremely beneficial for people working in the mining or oil exploration sectors, interior design, real estate, or physical asset management.

The Red Coral or Moonga gemstone is an auspicious gemstone of Lord Mangal, according to ancient Vedic science. A badly positioned mars in one’s horoscope might cause problems in one’s marriage. Such a person is known as a Manglik Doshi, and the difficult position is known as Mangal Dosh. Astrologers recommend wearing a genuine red coral gemstone to get rid of such a circumstance and conquer these problems. A certified Moonga is worn to remedy Mars’ malefic position in a person’s natal chart.

Red Coral is reported to be extremely beneficial to persons suffering from low self-esteem and despair. It is regarded as a boon to your mental, emotional, and psychological well-being. Aside from boosting your confidence, the remarkable relaxing vibrations of this orangish-red gem increase your attention and help you stay focused and cheerful during stressful situations.

Self-Esteem is an issue that affects a large number of individuals. Perhaps it is the result of a terrible tragedy, or perhaps they have a weak Sun or Mars in their birth chart.

Wearing the Moonga stone can work wonders for such persons. This is due to the fact that self-esteem is the foundation for achieving success in life. One will not be able to perform successfully at work if one does not have adequate self-esteem. Because of poor self-esteem, many people are prone to be scammed, even if they are intelligent and educated.

Mars, also known as Mangal, is a planet that represents a soldier, Senapati, self-assurance, and, most importantly, courage. When Mars is strong, a person has the courage to move on in life, becoming brave, and the so-called “Guts” feeling that people discuss is all tied to the planet Mangal. The Sun likewise signifies self-confidence, but the sort of self-confidence that the Sun provides is boundless; the confidence provided by the planet Sun is uncomplicated.

People management may be difficult for those in positions of high leadership. If you are one of those people who is having trouble with work and leadership, you should absolutely wear the Moonga.

To take advantage of all of the benefits listed above, always purchase a certified Moonga gem, since this confirms the authenticity and purity of the gemstone. After reading all of the fantastic benefits, if you’re wondering who can wear a Moonga stone, we’re here to assist.

Vedic astrology recommends wearing Munga ratan by Aries and Scorpio Zodiac Signs, i.e., Mesh or Vrischik Rashi. Similarly, red coral is the birthstone for the Aries sun sign according to Western astrology. However, ascendants of Cancer, Leo, Pisces, and Sagittarius can also wear and benefit from this lovely red-colored gemstone. These are some of the benefits of buying gems from Khanna Gemstone.

Khanna Gems is providing the best gemstone to its customers, this company provides its customers with a variety of gemstones.One can get to know more about Gemstone, by visiting the YouTube channel, the link of which is given on the top of the article.

Exploring the best beauty services in Singapore: A guide to the top salons and spas for all your pampering needs